prompted after the Chess Olympiad on Cuba 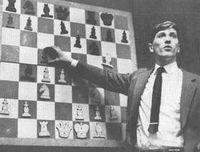 The FBI investigated American chess champion Bobby Fischer in the 1960s after the Cold War icon created a controversy at a tournament in Cuba, where he famously played against Fidel Castro, according to newly disclosed documents.

The FBI dossier, obtained under a Freedom of Information Act request, shows the bureau’s Mexico City office began probing the one-time chess prodigy after a tumultuous headline-grabbing trip to Havana.

Fischer was a Cold War hero who would ultimately best the Soviets at a game they had dominated, at a time when beating Communists stirred national passions.

Before ascending to take the world crown in an historic 1972 match against Russia’s Boris Spassky, the Brooklyn-reared Fischer traveled the globe to play in chess tournaments.

In 1966, Fischer flew to Havana, leading the U.S. delegation at the 17th Chess Olympiad, a top international competition. It was an era when Washington tightly controlled travel to Communist nations – U.S. officials, in fact, had rejected Fischer’s bid to compete there in a tournament a year earlier.

Once in Cuba, Fischer sparked an international stir when he refused to play against the Soviets because the match would be on a Saturday, conflicting with his religious practices. The Soviets were outraged and protested.

The controversy drew worldwide press coverage, and chess officials intervened. Fischer got his way and the match was rescheduled.

The FBI interviewed several sources it considered reliable about the incident. One unnamed source asserted the American chess team “had attempted to embarrass the Cuban Government in order to prevent any future world championship from being held in Cuba.”

Read the full article. We thank Andy Lehren for sending the link.